A new mission was released by Cm_Blast, “Aerial Nightmare”. This mod focuses on the use of the Atreides  “Airstrike” against the player. 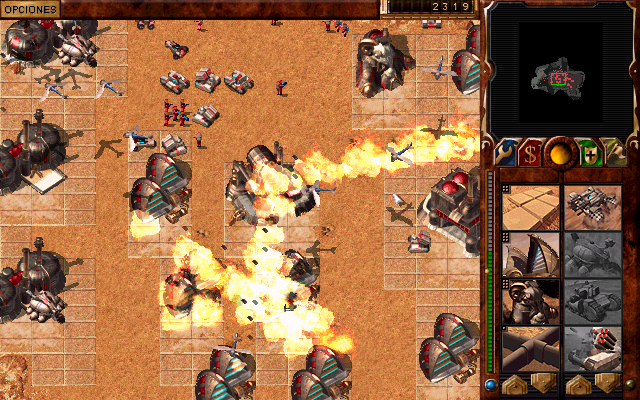 The Emperor Returns Updat... An update has been made to the mod “The Emperor Returns”. In first level the airstrike was suppose to attack, but due a low priority to attack
Old Site Status We have migrated the new site design to the root domain (d2kplus.com). The old site has been moved the old.d2kplus.com, where it will remain in its current form
17 Oct 2013 – Custo... As part of Gruntlord6’s work on his mod Rise of the Mercenaries, he is writing a modding guide to help explain how to make the most of
New Mod: Ordo’s Tactics A new mission was released by Cm_Blast, “Ordo’s Tactics”. This mod is an alternative take on the official Ordos campaign. Click here to view the page Discuss this
Dune 2000 Images Download There was a broken download link on the images page, I’ve corrected the issue and confirmed it is again working. Click here to view the page
Site Updates: December 20... Hey everyone, we have some updates to the site that we are excited to mention. The first change is that there is now the ability to view
Dedicated Server Move Com... Recently we completed a move to a dedicated server. Rather than sharing a virtual server (VPS) with other users, this allows us to have consistently fast connections
New Mod: No More Spice A new mission was released by Cm_Blast, “No More Spice”. This mod explores the interesting scenario where Sandworms no longer generate spice.    Click here to view the page
Server Changes MVI has announced that due to personal commitments, he will no longer be able to operate the site. Upon hearing this, I offered to host and maintain
Site Updates: May 2017, T... Hey everyone, just wanted to make a post to let everyone know that I am in fact still alive and kicking. Not much to post, just that