Cm_Blast has created a new Campaign mod titled “The Spacing Guild”. In it you explore the new concept of the Spacing Guild, a faction to which the numerous great houses owe a significant debt. 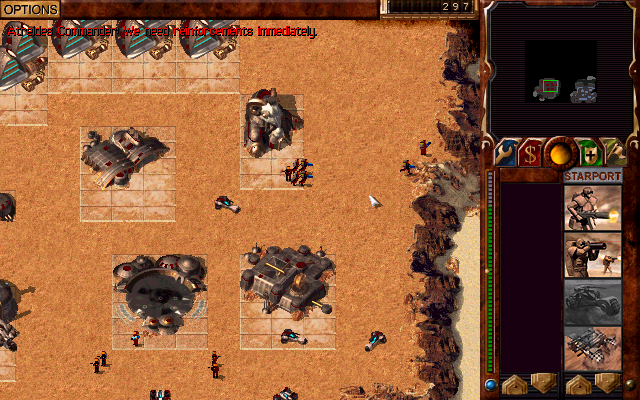 Check out the mod page: http://d2kplus.com/the-spacing-guild/

New Mod: Fremen Warriors Cm_Blast has created another new Campaign mod titled “Fremen Warriors”. This campaign focuses on the stealth and expert ambush tactics of the fremen. Check out the mod page: https://d2kplus.com/fremen-warriors/
New Mod: The Emperor’s ... A new mission was released by Cm_Blast, “The Emperor’s Plan”. This mod takes place in the same plotline as Dune 2000 and Dune 2, however the Emperor
17 Oct 2013 – Custo... As part of Gruntlord6’s work on his mod Rise of the Mercenaries, he is writing a modding guide to help explain how to make the most of
Mercenaries – Choose yo... A new mission was released by Cm_Blast, “Mercenaries – Choose your ally”. This is a single mission with the twist of allowing the player to select which
Map and Mission Editor Ve... Klofkac has released an update for his Map and Mission Editor, this time reaching version 2.0 Here is list of changes done since the last release (pre-release
Old Site Status We have migrated the new site design to the root domain (d2kplus.com). The old site has been moved the old.d2kplus.com, where it will remain in its current form
6 May 2014 – D2kx M... D2k Sardaukar has released an exciting new tool for Dune 2000, which allows to create hotkeys to change spice, jump between players and even set up cool
Site News: April 2016 Hey everyone, it’s been awhile since I’ve been able to make changes to the site so I made the time to sit down and make some improvements.
New Mod: No More Spice A new mission was released by Cm_Blast, “No More Spice”. This mod explores the interesting scenario where Sandworms no longer generate spice.    Click here to view the page
Server Changes MVI has announced that due to personal commitments, he will no longer be able to operate the site. Upon hearing this, I offered to host and maintain