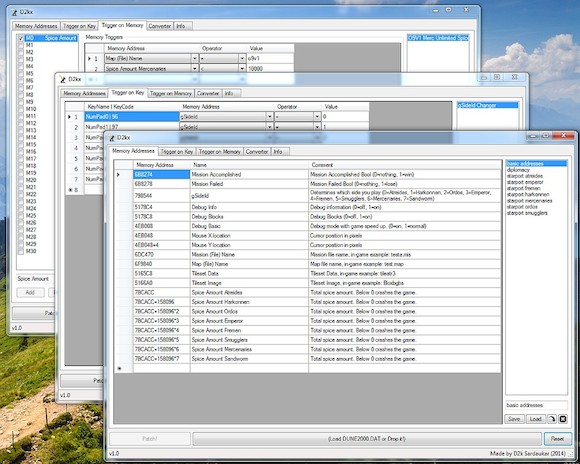 D2k Sardaukar has released an exciting new tool for Dune 2000, which allows to create hotkeys to change spice, jump between players and even set up cool triggers like giving your ally spice if they get below a certain value.

06 September 2014 –... I’m pleased to release Version 1 of the Build Queues Patch. This patch introduces queuing for units when you’re already building a unit from that building. So
New Campaign: Smugglers Ō... Cm_Blast has created another new Campaign mod┬Ātitled ŌĆ£Smugglers ŌĆō Mini CampaignŌĆØ. This┬Ā4 mission┬Ācampaign features you as the Smugglers, hunting for the valuable spice melange. Check out the
New Mod: OrdoŌĆÖs Tactics A new mission was released by Cm_Blast, ŌĆ£OrdoŌĆÖs TacticsŌĆØ. This┬Āmod is an alternative take on the official Ordos campaign. Click here to view the page Discuss this
New Mods: Tleilaxu Plague... Three new mods have been added to the site,┬ĀTleilaxu Plague, Special Skirmish┬Āand┬ĀEBFD Ancient Rivalries. All 3 are designed by ┬ĀCm_Blast and once again offer an interesting take
Server Changes MVI has announced that due to personal commitments, he will no longer be able to operate the site. Upon hearing this, I offered to host and maintain
17 Oct 2013 – Custo... As part of Gruntlord6’s work on his mod Rise of the Mercenaries, he is writing a modding guide to help explain how to make the most of
New Mod: IX ŌĆō The Techn... A new mission was released by Cm_Blast, “The Technology is ours”. This one features several changes to core gameplay, as well as the ability to play as
New Mod: Fremen Warriors Cm_Blast has created another new Campaign mod┬Ātitled ŌĆ£Fremen Warriors”. This campaign focuses on the stealth and expert ambush tactics of the fremen. Check out the mod page:┬Āhttps://d2kplus.com/fremen-warriors/
New Campaign: A New House Cm_Blast has created another new Campaign mod┬Ātitled ŌĆ£A New House”. This mod introduces a new house to the fight for Arrakis, one not used in the official
Old Site Status We have migrated the new┬Āsite design to the root domain (d2kplus.com). The old site has been moved the old.d2kplus.com, where it will remain in its current form