A new mission was released by Cm_Blast, “Ordo’s Tactics”. This mod is an alternative take on the official Ordos campaign. 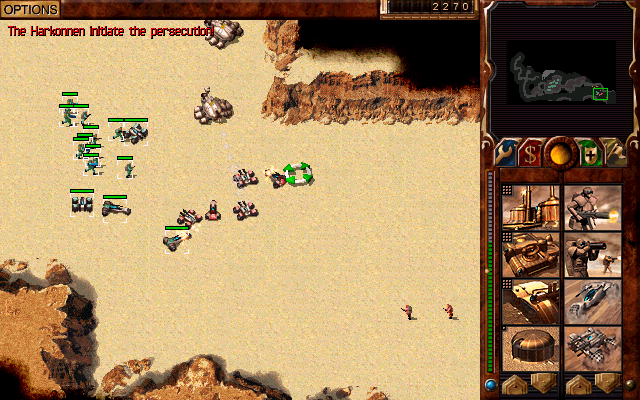 New Mod: IX – The Techn... A new mission was released by Cm_Blast, “The Technology is ours”. This one features several changes to core gameplay, as well as the ability to play as
17 Oct 2013 – Custo... As part of Gruntlord6’s work on his mod Rise of the Mercenaries, he is writing a modding guide to help explain how to make the most of
New Mod: Fremen Warriors Cm_Blast has created another new Campaign mod titled “Fremen Warriors”. This campaign focuses on the stealth and expert ambush tactics of the fremen. Check out the mod page: https://d2kplus.com/fremen-warriors/
06 September 2014 –... I’m pleased to release Version 1 of the Build Queues Patch. This patch introduces queuing for units when you’re already building a unit from that building. So
New Mod: Ordo’s Tactics A new mission was released by Cm_Blast, “Ordo’s Tactics”. This mod is an alternative take on the official Ordos campaign. Click here to view the page Discuss this
New Campaign: Butlerian J... Cm_Blast has created another new Campaign mod titled “Butlerian Jihad”. This campaign allows the player to play as each of the major houses as they attempt to uncover
Dune 2000 Images Download There was a broken download link on the images page, I’ve corrected the issue and confirmed it is again working. Click here to view the page
18 July 2014 – New ... Magier has released a new complete campaign for House Ordos, with an original story and in game briefings. The mod also supports both English and German versions
Old Site Status We have migrated the new site design to the root domain (d2kplus.com). The old site has been moved the old.d2kplus.com, where it will remain in its current form
New Mod: No More Spice A new mission was released by Cm_Blast, “No More Spice”. This mod explores the interesting scenario where Sandworms no longer generate spice.    Click here to view the page