Cm_Blast has created another new Campaign mod titled “Butlerian Jihad”. This campaign allows the player to play as each of the major houses as they attempt to uncover the mystery of events transpiring around them. 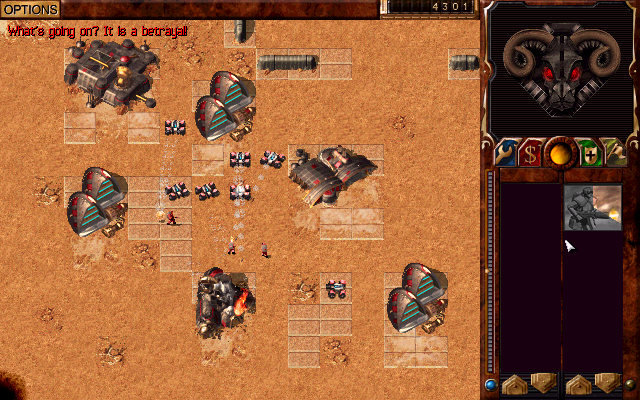 Check out the mod page: https://d2kplus.com/butlerian-jihad-campaign/

New Mods: Tleilaxu Plague... Three new mods have been added to the site, Tleilaxu Plague, Special Skirmish and EBFD Ancient Rivalries. All 3 are designed by  Cm_Blast and once again offer an interesting take
Dedicated Server Move Com... Recently we completed a move to a dedicated server. Rather than sharing a virtual server (VPS) with other users, this allows us to have consistently fast connections
The Emperor Returns Updat... An update has been made to the mod “The Emperor Returns”. In first level the airstrike was suppose to attack, but due a low priority to attack
dune2k.com Forum Integrat... We have completed our integration with the dune2k.com forum. Whenever a news post is created, a topic will automatically be created and posted to the forum containing
New Mod: Fremen Warriors Cm_Blast has created another new Campaign mod titled “Fremen Warriors”. This campaign focuses on the stealth and expert ambush tactics of the fremen. Check out the mod page: https://d2kplus.com/fremen-warriors/
New Mod: The Emperor’s ... A new mission was released by Cm_Blast, “The Emperor’s Plan”. This mod takes place in the same plotline as Dune 2000 and Dune 2, however the Emperor
New Tools Added Some new tools have been uploaded by Klofkac. The first is an updated version of his Map and Mission Editor, it includes a variety of features (too many
Site Redesign I have decided to give the site a new facelift. The main goal of this redesign was to make the site feel more modern and to make
New Mod: No More Spice A new mission was released by Cm_Blast, “No More Spice”. This mod explores the interesting scenario where Sandworms no longer generate spice.    Click here to view the page
Site News: April 2016 Hey everyone, it’s been awhile since I’ve been able to make changes to the site so I made the time to sit down and make some improvements.